Betelgeuse is a star - a red supergiant - lying in the popular and widely recognized constellation Orion. Betelgeuse is one of the brightest stars in the night sky and has been stirring up a lot of excitement recently due to its potential supernova transformation. If you are a fan of space, astronomy, and scientific curiosities, below you will find ten questions and answers about this giant star - enjoy!

This star was already known and observed in ancient times (knowledge about Betelgeuse was passed down in tales between Aborigines, and in the written texts, it was already discussed by Ptolemy), so it is hardly impossible to identify the first person who saw it.

The Englishman John Herschel, who in 1836 published his observations on its differences in brightness in the Outlines of Astronomy, is considered a modern discoverer and first researcher.

🌌 2. Which Galaxy is Betelgeuse in?

Is it in Andromeda? In Pinwheel? Or maybe in Whirlpool?

We don't have to look that far because Betelgeuse is in our galaxy - the Milky Way. This star lies in the Orion Arm (the spiral arm of the Milky Way) - in the same region as our solar system and the Earth.

🌃 3. How to Find Betelgeuse in the Night Sky?

Our red supergiant star is a member of the Orion constellation, one of the northern sky's largest and most recognizable constellations. You don't need astronomical binoculars or a telescope to spot Betelgeuse - you can observe it clearly with the naked eye. I'm giving you the simplest recipe to find Betelgeuse in the night sky:

🌎 4. How far is Betelgeuse from Earth?

By comparison, the average distance between the Earth and the Moon is 1.2 light seconds - not even minutes or hours!

The star closest to Earth except for the Sun, Proxima Centauri, is 4.22 light-years from our planet.

The farthest distance that humanity has reached from Earth (and not even with living passengers on board, but as a machine built by us) is about 21 light hours (as of 2022) - this was achieved by the Voyager 1 probe launched in 1977.

As you can see, the distance between Earth and Betelgeuse is quite impressive.

Yes, it is, and it's normal behavior for this type of star.

Our red supergiant is a variable star, which means it changes its magnitude (apparent "brightness") from time to time.

Updated observations of Betelgeuse’s regular pulses allowed researchers to confirm that the primary cause of variability is something called the “Kappa Mechanism” which destabilizes the star’s equilibrium essentially causing Betelgeuse to “breath” as it swells and shrinks in size and brightness.

✋ 6. What does Betelgeuse mean?

The English name Betelgeuse comes from the Arabic language and means "The Hand of Orion."

🔭 8. How to Photograph Betelgeuse (When it is Still "Alive")?

Betelgeuse is one of the brightest stars visible in the sky, so you can even take a picture of it with a smartphone with a good camera.

However, if you want an effect slightly better than a white/yellow/orange dot on a black background, it is worth using a somewhat more advanced astrophotography kit:

Set your lens aperture to fully open (to the lowest F-number), put some high ISO (1600, 3200, 6400 - it depends on your camera), point your lens to the star, set your mount with the camera on a tripod, and shoot for a few seconds.

Of course, you can apply all the astrophotography techniques I write about on this site, like tracking and stacking, to get even better results!

Below is the effect obtained with a typical mid-range mirrorless camera - Fuji X-T20 - and a 35mm lens (Fujinon 35mm F / 1.4) on a stationary tripod (without using any tracker/EQ mount).

💥 9. Will and When Betelgeuse Explode (Soon?) and Goes Supernova?

It all depends on the definition of the word "soon."

Some day, for sure. But probably not today, not tomorrow, not next year, or not even the next decade.

Here's what the researchers at Kavli IPMU have to say:

Betelgeuse is not at all close to exploding, and that it is too far from Earth for the eventual explosion to have significant impact here, even though it is still a really big deal when a supernova goes off.

Yes, Betelgeuse will explode, but it might as well be tomorrow or in a hundred thousand years as well. The chances of seeing a new supernova in our lifetime are rather slim.

Let's check what NASA has to say about it:

Any planet with life on it near a star that goes supernova would indeed experience problems. X- and gamma-ray radiation from the supernova could damage the ozone layer, which protects us from harmful ultraviolet light in the sun's rays. The less ozone there is, the more UV light reaches the surface. At some wavelengths, just a 10 percent increase in ground-level UV can be lethal to some organisms, including phytoplankton near the ocean surface. Because these organisms form the basis of oxygen production on Earth and the marine food chain, any significant disruption to them could cascade into a planet-wide problem.

It sounds dangerous. However, there is hope!

Betelgeuse is 642.5 light-years from Earth. According to NASA, only planets that are less than 50 light-years from the source of the blast (over 12 times our distance from Betelgeuse) have a problem with a supernova.

Given the vastness of space and the long times between supernovae, astronomers can say with certainty that there is no threatening star close enough to hurt Earth.

Although the red supergiant is one of the closest stars for a candidate to the future Near-Earth supernova, it will probably not kill us, simply because the distance from it to the Earth is too great. Earth will probably not be destroyed or even affected at all.

Some day for sure, but rather not during our lifetime.

How many light-years is Betelgeuse from Earth?

Can Betelgeuse be seen from Earth?

Yes, it can be, even with naked eyes.

Which star is Betelgeuse in the Orion constellation?

Betelgeuse is an orange-colored "dot" just above the Orion's Belt (Alnitak, Alnilam, and Mintaka stars).

What are stars near Betelgeuse?

Is Betelgeuse bigger than Sun? 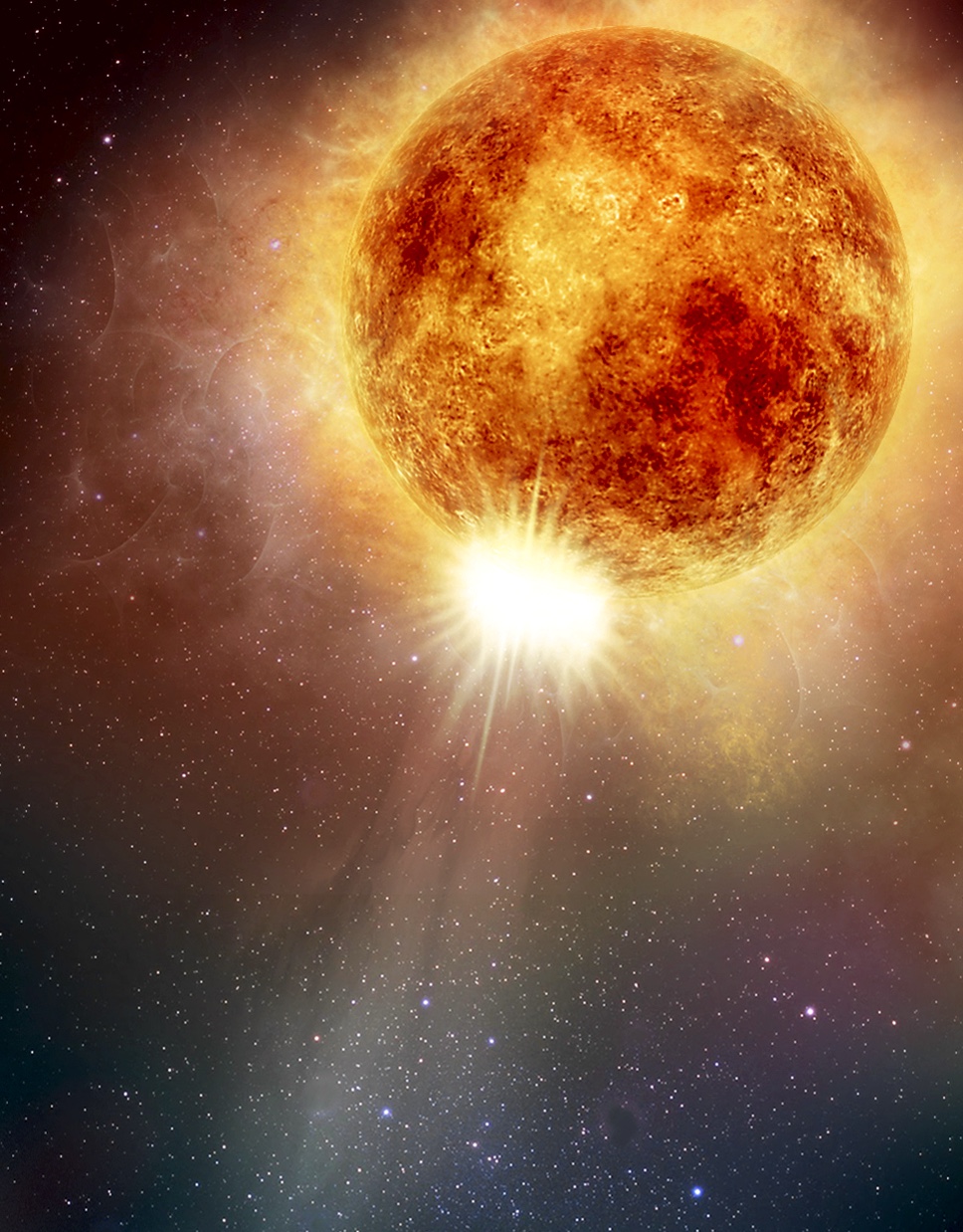