Are you passionate about space and astronomy? Do you wonder what the Solar System looks like, how it is built, and what is the order of the planets from the Sun in our Solar System? Then, you are in the right place to finally discover it! This article will teach about all the eight official planets of the Solar System in order from the Sun (according to the International Astronomical Union - IAU) with photos, sizes, and physical characteristics. In addition, there are interesting facts about each planet and information about what happened to Pluto. Let's get started!

The Solar System is made up of eight planets that orbit the Sun, and their order from the Sun is as follows:

Mercury is the first planet from the Sun in our Solar System. He amazed people with his retrograde movements from the beginning and his recently discovered phases and moon-like similarities. Mercury is the closest (first) planet to the Sun and the smallest member of our Solar System. Its diameter is 4,878 kilometers, and its mass is only 5.5% of the mass of the Earth. As a result, the gravitational force on Mercury is not strong enough to hold the planet's atmosphere. Mercury's surface, covered with innumerable craters, is thus exposed to intense solar radiation.

Venus, the "younger sister" of the Earth, is a little smaller than our planet - its diameter is 12104 kilometers and is the second planet in order from the Sun. The geological structure of this planet most probably resembles Earth's. However, the dense layer of clouds made us know little about this planet until the 1960s. It was not until December 1962 that the first measurements on Venus were transmitted to Earth by the Mariner 2 spacecraft.

The Earth, our home, is the third planet from the Sun.

The Moon - How far away is the Moon from Earth?

That's a good astronomy question! So without further ado - if you want to know how far away is the Moon from the Earth, then here I provide the answer: the average distance (because of the elliptical orbit it is not constant - the momentary distance of the Earth-Moon changes by about 50,000 kilometers during the month) from the center of the Earth to the center of the Moon is precisely 384,400 km / 238,854 miles. But how can you imagine it? How can you get some sense of feeling about the distance? Keep reading!

If we chose 380,000 kilometers (slightly below the true-average one) as the distance, this is how it would like:

It looks much closer to me when I'm gazing at the Moon from my backyard!

What? Are you serious?!

Yes, I am! It's hard to believe (especially considering the sizes of the Solar System planets like Jupiter or Saturn), but it's a mere fact - and it's easy to calculate it.

Let's check the diameters of all the other planets of the Solar System (we don't take the Pluto dwarf planet into the calculation, as it's not considered as a fully-fledged Solar System planet anymore):

Mars, the fourth planet in order from the Sun, is adjacent to the Earth on the outer side. Mars is a planet considered to be the most similar to the Earth and not only in terms of appearance: there is water there, its axis of rotation is similar to the Earth's, and a day on Mars lasts only 41 minutes longer than on the Earth. Mars is the best-researched planet of the Solar System (except Earth, of course!).

Jupiter, the fifth planet from the Sun, is the biggest planet in the Solar System. It is one of the four "gas giants" in our System, alongside Saturn, Uranus, and Neptune. Jupiter is mainly made of gas (only a tiny fraction of it is rock and metal), so there is no solid surface. Using binoculars, a small telescope, or a reasonably bright telephoto lens, you can observe the four largest moons of Jupiter - Io, Europa, Ganymede, and Callisto. The first such observation in my life made an electrifying impression - I recommend it to everyone!

Saturn, the sixth planet from the Sun, is the second-largest planet in the Solar System - right after Jupiter. The ring planet consists mainly of hydrogen and helium (with a small addition of ammonia and methane) and therefore also belongs to the group of gas giants. Saturn is almost twice as far from the Sun as Jupiter, making it the last planet in the Solar System observed by ancient astronomers.

Uranus, the seventh planet from the Sun, was initially taken as a comet. It's the coldest planet in the Solar System.

Uranus was first explored on March 13, 1781, by Sir William Herschel with the telescope he built. The planet was initially considered a comet - because, after a few hours of observation, it apparently moved in the sky - but after two years (in 1783), it officially obtained the status of a planet. Uranus is almost 20 times farther from the Sun than Earth, and it is the coldest planet in the Solar System.

To observe this gas giant, you probably need to use binoculars or a telescope - Uranus is at the limit of the human eye's visibility, especially in urban conditions, where there is a lot of pollution of the sky with artificial light from nearby lanterns.

Neptune is the eighth and last planet from the Sun in the Solar System. This ocean-blue gas giant is probably composed of a rocky core and a surface ocean hidden under the atmosphere of hydrogen and helium. Due to the great distance of Neptune from Earth, it is not yet a well-studied planet.

Before the departure of Voyager 2 (August 20, 1977), science knew about two moons of Neptune and several ring structures - today, after the space probe provided the data in 1989, we learn about fourteen moons and five rings.

Is Pluto a Planet? And Why is it no Longer Anymore?

Pluto was discovered by the American astronomer Clyde Tombaugh in 1930 and then qualified as a fully-fledged Solar System planet and maintained this status until 2006. This year, the International Astronomical Union (IAU) introduced the concept of a dwarf planet and classified the planet in this category. Therefore, the answer to the question "is Pluto a planet?" is no, not anymore (but who knows what the future holds?).

How Is a Dwarf Planet Different From an "Ordinary" Planet?

A dwarf planet is a celestial body that has not cleared its orbit and has not become gravitationally dominant in its area, which is why it shares its orbital space with other celestial bodies of a similar size (however, scientists, astronomers, and astrophysicists are still debating this definition).

The planet has five natural satellites:

Other Dwarf Planets in the Solar System

At the time of writing this, the International Astronomical Union (IAU) officially recognizes five celestial bodies as dwarf planets in the Solar System:

Of this group, only Ceres orbits in the asteroid belt between Mars and Jupiter. Therefore, the remaining objects orbit beyond Neptune's orbit and are also referred to as plutoids.

What is the order of the planets from the Sun?

How to remember the planets in order?

If you want to remember the Solar system planets order easily, learn a popular mnemonic that is often taught in school: "My Very Educated Mother Just Served Us Noodles." The first letter of every word is the first letter of the proper planet - in order!

How far away is the Moon from the Earth?

Is Pluto a Planet?

No, it is no longer a fully-fledged Solar System planet anymore. In 2006, the IAU (International Astronomical Union) introduced the concept of a dwarf planet and classified the planet in this category, similar to planets Ceres, Haumea, Makemake, and Eris.

Locate the Planets on the night sky using these mobile apps: 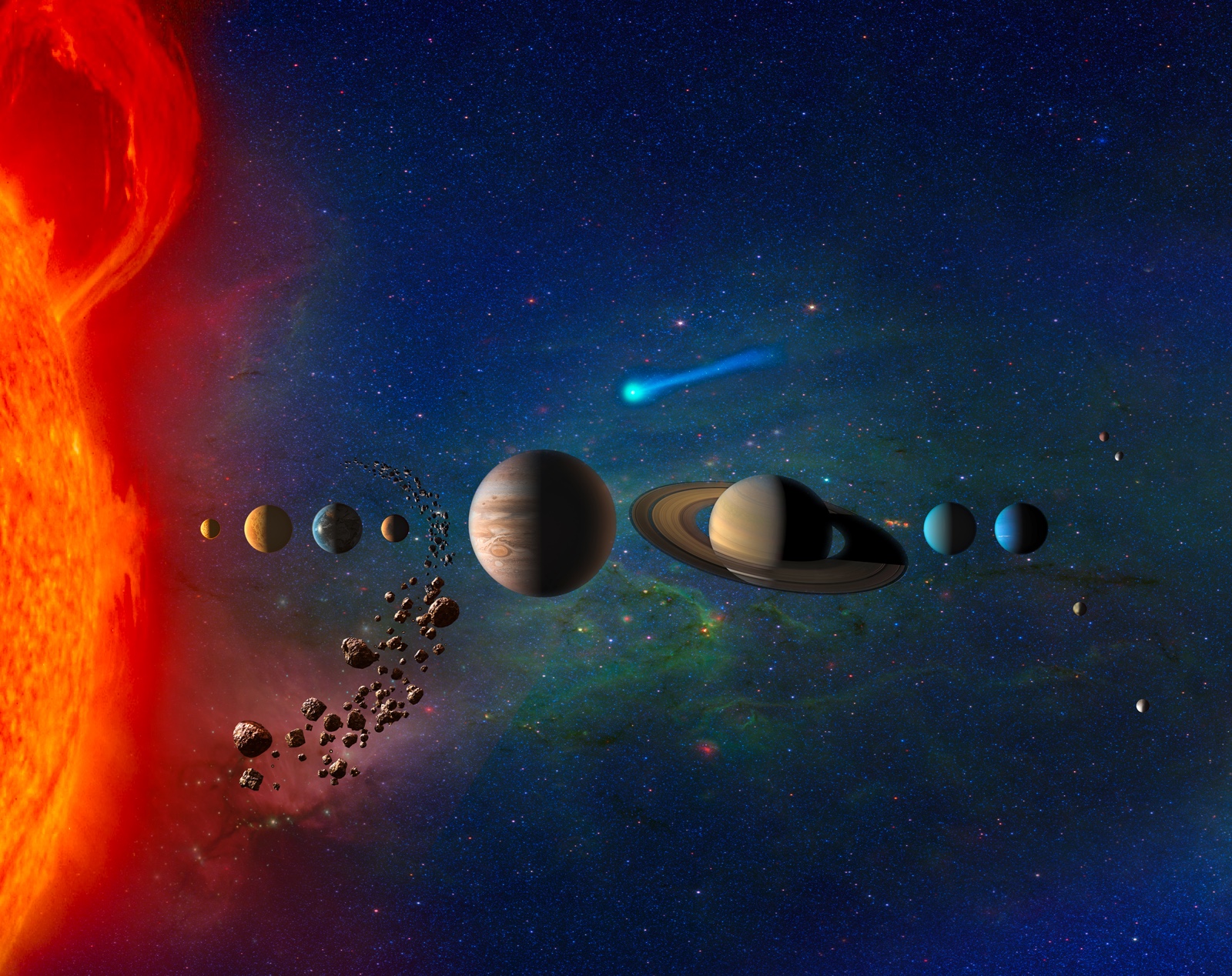